Cognitively Guided Instruction (CGI) is a professional development program that aims to improve teachers' understanding of how children develop arithmetic concepts. The professional development program was based on earlier research detailing various problem types and strategies that students employ while working on addition and subtraction word problems. The development of CGI and research concerning it was influential for the way it integrated the study of student learning with the study of teacher decision-making.

From 1979 to 1981, Carpenter, Hiebert and Moser conducted a study of the mathematical thinking of approximately 100 first, second and third grade students in Madison, Wisconsin. They interviewed each student three times each year, observing them solve addition and subtraction word problems. Their aim was to investigate "the development of children's abilities to solve verbal addition and subtraction problems and particularly in the processes and strategies used by children." (Carpenter & Moser, (1979)) 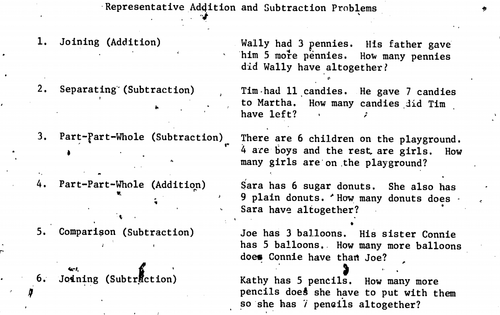 Their earliest work identified a taxonomy of addition and subtraction word problem types. Different problem within this taxonomy are differently difficult for children even when the "arithmetic" remains constant. For example, "Tom had 11 apples, and then lost 3 of them, how many does he have left?" might be easier for a student to represent than "Tom has 11 apples and 3 of them are spoiled, how many are not spoiled?" as the former problem has an action that a student can act out using counters, paper or some other representation.

Another major result of this early study was the identification of a learning progression that children pass through on their way to more advanced procedures for solving addition/subtraction word problems. At early stages, they found that children solve word problems by directly representing the action in a problem, with counters or any other available physical object. (For this reason, word problems without clearly presented actions tend to be more difficult at these early stages.) Students then develop various counting strategies to make their work more efficient, and eventually come to abstract the structure of the word problem and use memorized facts to solve problems.

After detailing student thinking about addition and subtraction, the CGI researchers turned to teacher knowledge about that student thinking. In Carpenter, Fennema, Peterson, & Carey (1988), the researchers set out to answer four questions about pedagogical content knowledge:

1. What do teachers know about the distinctions between different addition and subtraction problem types?

2. What do teachers know about the strategies that children use to solve different problems?

3. How successful are teachers in predicting their own students' success in solving different types of problems and in identifying the strategies used by children to solve problems of different types?

4. What is the relation between different measures of teachers' pedagogical content knowledge and their students' achievement?

Their findings indicated that teachers have important and specific knowledge relevant to student thinking about addition/subtraction word problems. For example, teachers were generally able to identify relevant problem types and teachers also had general knowledge of the strategies that students often use to solve these problems.

In a series of studies of the teachers subsequent to the workshop, the CGI team documented connections between teacher decision-making and the CGI knowledge base. Teachers who had participated in their workshop gave their students more opportunities to solve problems, expected multiple strategies and knew more about student thinking. In addition, student achievement on mathematical tasks improved. (Fennema, Carpenter, Franke, Levi, Jacobs, & Empson (1996))

Children's Mathematics and Other Publications

In 1999, the CGI team published Children's Mathematics. The book presented their research findings on student thinking surrounding addition, subtraction, multiplication and division for a teacher audience. The second edition of the book was republished in 2014 (http://heinemann.com/childrensmath/). It contains online videos of student problem solving that illustrates the strategies and representations that children use to solve word problems.

The work of CGI has been highly influential within math education research. Carpenter, Fennema, Peterson, Chiang, & Loef (1989) was included in NCTM's collection of "Classics in Mathematics Education Research." It is credited for its groundbreaking work linking teacher learning with student learning, and for launching a rich research program that hs expanded to many facets of student thinking and teacher thinking.

The CGI work has been limited to the primary school grades. Some researchers have argued that a CGI program would be ill-suited for instructing teachers in student thinking in higher grades, due to the complexity of student conceptual knowledge in more advanced topics. Lesh & Doerr (2003) make this criticism, and propose an approach that encourages teachers to directly observe and develop their own models for student thinking in higher grades. (See, Models and Modeling Perspective.)

Some reviewers have also noted (http://www.promisingpractices.net/program.asp?programid=114) that student performance on the Iowa Test of Basic Skills did not differ significantly between control and CGI groups in Carpenter, Fennema, Peterson, Chiang, & Loef (1989).